I have been directing theater for 20 years. Nine of those years were spent as artistic director and founder of CUT Theatre company in Sydney. In that time I directed all of CUT’s 26 productions, including King Lear, Hamlet, Accidental Death of an Anarchist, Othello, Rosencrantz and Guildenstern are Dead and Macbeth. Nine years ago having relocated to London I realized that I was not directing the kind of theater that I was really excited about seeing, so I decided to change that. The piece that I wanted more of was movement, dance: the physical expression of an emotional state. My work had always been described as physical, but in the theater world anything that doesn’t look like a radio play is ‘physical’, I wanted more and began to study improvised dance and choreography, and improvisation led me to work with live musicians. 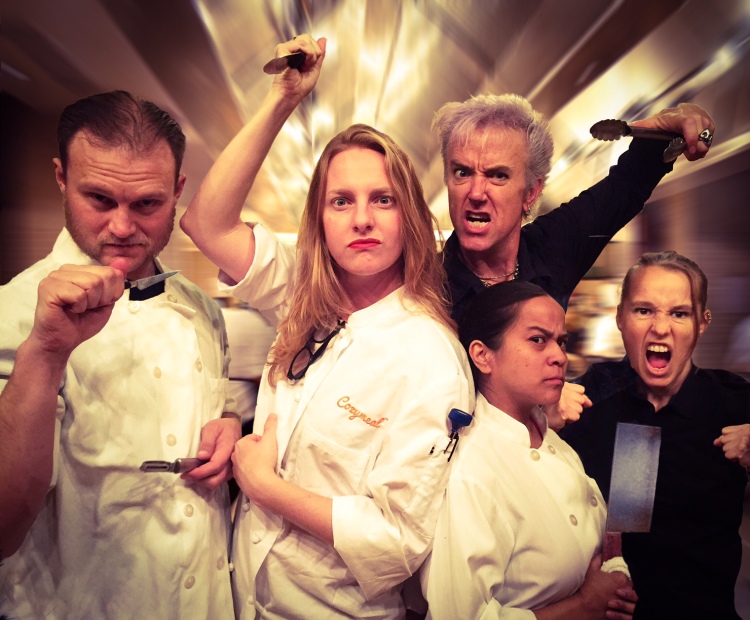 Feed the kitchen was a robust and physical comedy theatre piece with chefs, puppets, dance, and the audience being served a 4 course tasting menu. It was an original production created by Rapid Descent and writer Lisa Drostova that performed in San Francisco in November 2016.

Feed the Kitchen was an immersive and experiential piece inspired both by my desire for theatre that touches people in a more lasting and multi layered way, and the 20 plus years I have spent working as a chef to fund my life as an artist.

Feed the Kitchen was been created by myself, it’s cast, and writer Lisa Drostova who has also spent over 20 years working in the food service industry. It featured Jenny Gamboa: a chef and performer, Tess Middlebrook : a chef, comedian and performer, Ian Greeb: a performer, character fabricator and puppeteer, Cason MacBride: a performer, clown and dancer and Ronja Ver: a performer and dancer.

This show was a crazy and ambitious project and I was blessed to have a super talented cast and crew to work with on it’s creation.

Let’s get to the important part: What did you get to eat?

As part of the action and story of Feed the Kitchen the audience, were fed a 4 course tasting menu as follows:

Chamber Macbeth was based on Shakespeare’s Macbeth, with live brass trio, live vocal score and using a loop station (which digitally records and plays back sound samples onstage, and was used to create a multilayered live sound score). It had a cast of 10 performers who worked vocally, physically and with text and included a brass trio made up of two trumpets and a French horn. All of the music was original and composed by Aaron Priskorn who was one of the trumpet players in the trio.

The final Chamber Macbeth was a project that was in development for 3 years. We worked on various aspects of it and had work in progress showings, both small ones for friends and family and a staged 50 min version as part of the San Francisco Fringe festival called Macbeth-limited edition. The length of development made it hard to maintain energy at times, but did eventually lead to securing funding from the San Francisco Arts Commission to create the final version Chamber Macbeth.

Sometimes it takes a lie to catch a liar.

What’s a family to do when their head of household falls head-over-heels for a religious fake? When they are forced to live with Tartuffe, the family of Orgon soon find that all of their favorite things in life are deemed sinful by this pseudo religious house guest. The only way to bring life back to normal is to expose Tartuffe for the fraud they all know him to be, and that’s when Dorrine comes up with a plan….

Rapid Descent’s Tartuffe was a fast and crazy production with a cast of ten and live trumpet. We performed it in November 2011 at Shotwell Studios in the Mission.

SKIN TIGHT is the story of Elizabeth and Tom, a New Zealand couple. Equal parts memory play, contemporary love story, and timeless drama Gary Henderson’s script is a spare and honest narrative about an enduring romance. Born in different social classes their relationship had been challenged from the beginning and continued to be tested by war, infidelity, an estranged daughter, and terminal illness. Far from perfect and filled with passion, the history and complexity of these lovers is revealed as much with affection as it is with hostility. Fist fights, kissing, arguments, and silences found their place in this production as the cast played with an athleticism of both the heart and body, reveal the bare essence of the text. The production was very well received by both audiences and reviewers and was a highly successful debut for the company. 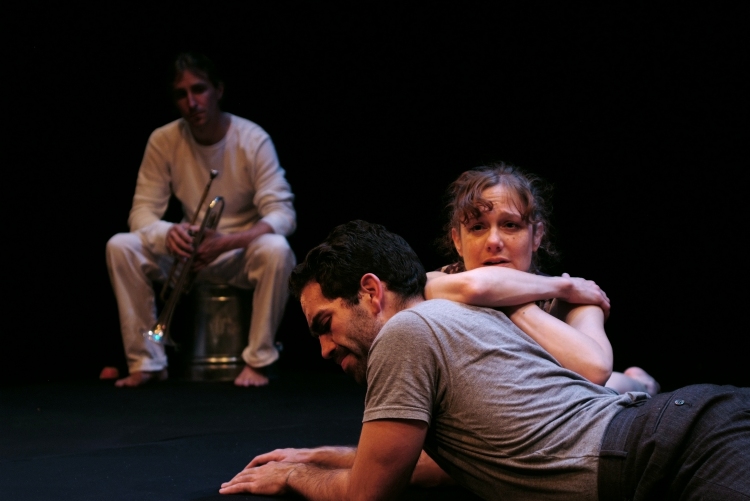 This You Tube clip is a slideshow of photos from Rapid Descent’s Skin Tight. Featuring Nathaniel Justiniano, Aaron Priskorn and Beth Deitchman. Photos by Luiza Silva and original music written and performed by Aaron Priskorn.

These two clips are from shows that I directed in Sydney, Australia, with CUT Theatre Company. 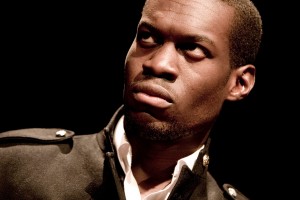 One thought on “Meg”